WHAT IS TEA LEAF IRONSTONE CHINA?

English ironstone production began early in the 1800s and the earliest ironstone items were generally sold after being decorated with any of a number of motifs -- copies of Oriental patterns, historical blue, flow blue, mulberry, all-over lustre applications, gaudy designs and numerous others.  Some have irreverently claimed that this early overall decoration was intended to hide flaws in the potting process.  By the 1840s, however, the quality of ironstone had, indeed, improved so significantly that undecorated white ironstone began to be sold in large quantities to the world market.  All-white ironstone was a huge success with the North American consumer and sold well for scores of potters whose output was destined for the United States and Canada.

Nearly concurrent with the popularity of this undecorated white ironstone, a parallel trend emerged.  Some ironstone potters began to enhance their wares with various copper lustre effects and embellishments.  Beginning simply with the addition of copper-colored lustre bands to pieces, the decorators eventually employed a variety of fanciful floral and geometric motifs.  This copper lustre treatment was obtained by the addition of gold or copper oxide to the glazes which the potter used in the decorating phase of the firing.

So what is Tea Leaf Ironstone China?  Strictly speaking, Tea Leaf is considered to be any English or American ironstone china decorated with the traditional Tea Leaf motif consisting of three leaves and a bud, in copper or gold lustre.  Today's collectors, however, have expanded that definition of Tea Leaf to include ANY white ironstone decorated with copper lustre motifs, whether those decorations be floral, botanical, geometric or simply lustre banded. 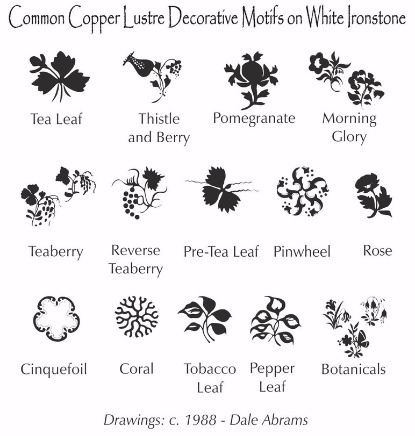 The chart above shows several of the many motifs ultimately considered to be in the Tea Leaf family.

How did Tea Leaf change from the earliest production to later wares?  As was the case with the body styles themselves, early application of copper lustre to white ironstone started simply, with the addition of lustre banding or enhancement along the rims, finials and handles of hollowware and flat pieces.  Lustre-decorated pieces of the 1840s and early 1850s tend to be simple and geometric, like the copper lustre decoration itself.  The ironstone body styles are usually heavy and primarily many-sided, although still often splendidly embossed.  Favorite early potters employing copper lustre decorations include Edward Walley, Livesley & Powell, Jacob Furnival, T.&R. Boote and John Farrall.

The 1870s and 1880s are characterized by more simple body styles (square and rounded) with plain or fanciful handles and finials which were no-doubt more easily (and inexpensively) mass-produced yet still satisfied the desire of the American family for this durable and practical whiteware.  Even the copper lustre applications became more "standardized" and few of the Tea Leaf Variant motifs are found in these years.  Body weights are slightly less dense, lighter, than earlier wares, yet still durable enough to survive difficult ocean and overland journeys.  Among the most prolific Tea Leaf potters of this period are Alfred Meakin, Wedgwood & Co., John Edwards, Powell & Bishop, Thos. Furnival, Johnson Bros., Anthony Shaw & Sons, Arthur Wilkinson and others.

Evidence today suggests that Tea Leaf was a favorite of farm and working-class folks.  While some of the items in a Tea Leaf set (i.e., bone dishes, butter pats, etc.) mimic elements of a more elaborate Victorian place settings, Tea Leaf is generally though to have been "common folks" china.  Interestingly enough, most Tea Leaf collectors today began their collections by inheriting a piece of Tea Leaf from a cherished family member.  They remember Tea Leaf in the corner cupboards and on special-occasion tables of grandparents and great-grandparents.

By the turn-of-the-century the popularity and production of Tea Leaf ironstone had waned significantly.  Although the 1960s saw a brief resurgence of Tea Leaf production by both British (Wm. Adams) and American (Red Cliff) manufacturers, at that time the Tea Leaf motif failed to capture the hearts of American consumers as had the wares of a century earlier.  Today, however, the original and the more "contemporary" Tea Leaf are passionately collected.  Tea Leaf, its Variant motifs and copper lustre decorated white ironstone have once again become prized for their durability, beauty, simplicity, craft and style.

May not be reproduced in whole or part without written permission from the author (TLAntiques@aol.com)

Print | Sitemap
All materials on this Web Site are copyright to the Tea Leaf Club International, 2000-2019. Use of Content and Images is prohibited without written permission of the copyright holder. Contact us at TeaLeafClub@aol.com.
Login